Although the car is still the dominant means of transport, the pressure to change the mobility culture and thus, to rededicate traffic areas is becoming increasingly great. Some of today’s problems related to cars, such as poor air quality or high noise emissions, could be solved by replacing the combustion engine with an electric drive. This can be implemented in car-sized electric vehicles (EV) as well as in LEVs. LEVs, with their small size and low consumption, have the potential to improve the quality of life in cities through the reallocation of areas used for cars. 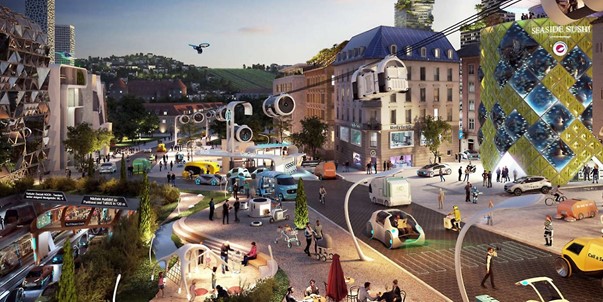 In general, LEVs occupy considerably less parking space than cars and replacing cars with LEVs would hence lead to considerable potential for alternative use of public space. Areas freed up by the smaller size of LEVs can provide room for active modes such as walking or cycling paths, or can be rededicated to open spaces for social interaction. The combination of providing more room for active modes and improving city design with attractive surroundings could encourage the use of public and active transportation, reinforcing the positive ecological effects of replacing cars with LEVs by promoting a modal shift.

In addition to global issues, such as climate protection, local urban framework conditions are leading to pressure for action. For the development of the LEV market, it is conceivable that measures such as speed limits (e.g., 30 km/h zones) could be put in place. Not only would this increase road safety, LEVs with a technical limitation of 17 to 45 km/h would also not hinder urban traffic, as is currently the case in most cities which have a maximum speed of 50 km/h. In Graz, for example, a speed limit of 30 km/h applies to all roads in the city except for priority roads. This applies to 80% of the road network. Regulations in this respect can be laid down in noise action plans as well as in clean air plans.

A congestion charge can also provide an incentive for LEVs through regulations such as discounts or free entry. Measures such as parking space management can also be a major advantage for the use of LEVs. In Japan, for example, the need for proof of a private parking space certificate for the registration of cars in some cities has led to the registration of a large number of small vehicles (kei-cars). These are exempt from the obligation to provide such proof. A car parking space in Japan can cost up to several thousand euros per month. As a result, cities have a large toolbox of measures that could lead to the broader uptake of LEVs.

A higher degree of LEV use would require significant changes to road traffic regulations and the allocation of land used by cars. Concrete recommendations for actions include:

Living on a planet with limited resources and worsening climate change requires fundamental shifts in many fields, including the need for reorganising mobility. Reducing trips and mileage, shifting to sustainable transport modes, and optimising transport technology require close interdisciplinary collaboration between many scientific fields, such as urban and transport planning, engineering, and social psychology. Developing technical solutions is important just as understanding societal aspects and fostering a willingness to change, from political and regulative levels down to individual behaviour.  If today’s transport systems were to be reorganised, reducing hurdles for vehicles such as LEVs, they could be more successful and could become an important component in future systems.

[1] Image source: Sustainable mobility in the city of the future / Daimler > Magazine > Sustainbility